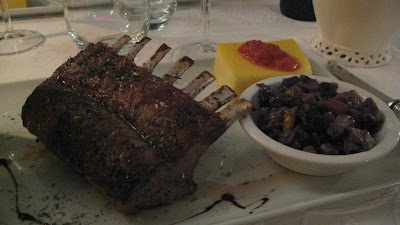 
The marriage of meat and fish is an ancient one in the Mediterranean.

Trim off the excess surface fat from the leg of lamb. Cut 3-4 garlic cloves in slivers. With a knife, make slits in the lamb and insert either an anchovy filet and a garlic sliver. Lay the lamb in a baking dish and surround with the rest of the garlic cloves “in their shirt” unpeeled. Drizzle olive oil over the lamb, pour water in the bottom of the baking dish and place the lamb in the oven, making sure that the oven has reached its temperature.

There are many ways to roast a lamb. One method is as follows: immediately lower the temperature to 280F/140C and cook for 10 minutes per pound or 25 minutes a kilo. Check the lamb by inserting a long knife into its center and then touching the tip. When done, it will be slightly warmer than your body – around 120F/ 70C. This is for rare lamb. Remove the lamb and let sit covered for 10 minutes before carving.

Simple baked or boiled potatoes go well with this dish.

Posted by The Sabbatical Chef at 10:33 AM No comments: