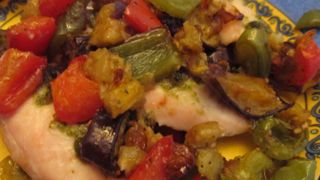 It's obvious to anyone who reads this blog that I love to eat.  I have learned to love to cook over the past  few years, thanks to my time spent working in Arles, France with Chef Érick.  (The pupil went back to visit the master in July!) 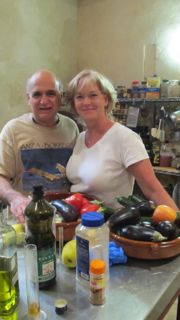 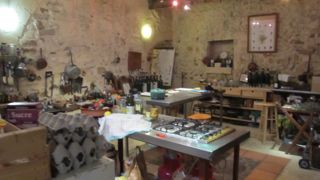 The B&B has been sold.  But not to me.  To a very nice Italian fellow.  I met him.  But the kitchen still looks and smells the same.  Chef Érick seems happy, less worried.  His children are living in the States now for the next 18 months while their mom takes on goat cheese-making in northern Michigan.  I know that will be difficult for him, but everyone will adjust.  (I ran into his ex at the Festival of Cheese last weekend.  She is American, but my only experience with her has been in France so it was kind of strange!)
Anyway, back to today's story.  I made up a recipe!  I have become quite adept at following others' recipes, but I am not well-known for improvisation.  However, I did it quite successfully this time.  I have discovered the delicious-ness of roasted summer vegetables and decided to throw in some chicken and some pesto that I brought back from the market in Isle-sur-la-Sorgue that I bought from a delightful merchant.
The BFF bought some, too, bien sûr! 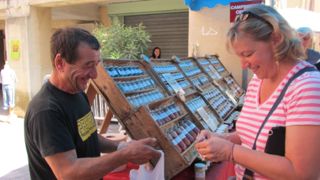 I am still attempting to reign in my sweet tooth and eat other healthy things, including lots of fresh vegetables.  I'm still following The Skinny Rules by Bob Harper... (-4 lbs. almost 2 kg)  Bob is big on fresh fruit and vegetables.  I love him for this.
So, here's my recipe.  Not complicated and no real measurements needed!

Choose quantities based on how many people you are feeding.  I didn't use tomatoes, but used a tomato sauce made to slather on bruschetta.  Harris Teeter sells a roasted vegetable tapenade that would be good, too.

Preheat oven to 425˚F.  Line a baking sheet with foil.  Spray with cooking spray, if you wish, to keep vegetables from sticking.
Chop vegetables and place in a ziploc bag with enough olive oil to thinly coat them.  Maybe 2 tablespoons, depending on how many vegetables you are using.  Sprinkle in a little coarse sea salt, if you wish, and herbes de Provence.  Make sure the bag is completely sealed and shake to mix it all up.
Arrange the vegetables in a single layer on the baking sheet.
Place in the oven and set the timer for about 15 minutes.
While the vegetables are roasting, prepare the chicken.  I used breast tenderloins (because that's what the Ex-Ex bought at the store and they worked well because they cooked quickly).  If using boneless, skinless breasts, pound them flat or perhaps cut them into smaller pieces so they will cook faster.
At the end of the 15 minutes, remove the pan from the oven.  Reduce oven temperature to 400˚F.
Add the bruschetta sauce or vegetable tapenade.  Place the chicken on top of the vegetables. Generously brush the chicken with pesto. (Pesto is one of my favorite things in the whole world, so I do not skimp on this!)
Return to oven and cook for 15-20 more minutes or until the chicken juices run clear when pierced with a fork.

Bon appétit to all lovers of summer vegetables!  Your mom was right-- eat your vegetables!

Posted by The Sabbatical Chef at 6:43 AM