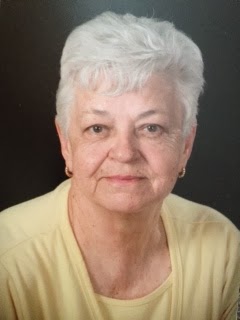 Today is my mama's birthday.  I love this photo of her.  I think she had it taken at church just a few months ago.  I seriously have more wrinkles than she does.  My mom is my hero.  Not because she has won the Nobel Peace Prize, written a best-selling novel, found the cure for the common cold or worked with orphans in a third world country. She is my hero because she is the best person I know.
Mildred's life has never been an easy one.  She was born in Spruce Pine, to Tennie and Jess Gillespie. She was raised on top of a mountain on a farm in the Estatoe / Penland section of Mitchell County.  I didn't know my grandfather very well.  He was very quiet.  He had been a coal miner and he always wore overalls.  I think he died of emphysema.  Coal dust and cigarette smoke. 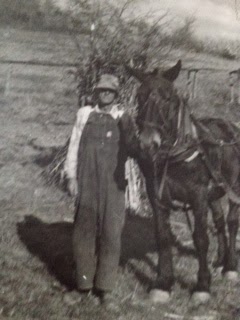 I did spend more time with my granny. She could be tough.  I remember being sent to the farm when I came down with German measles. Mama didn't want the younger ones to catch them.  Granny made sassafras tea for me and made me stay in a dark room with no books to read.  The measles could ruin my eyesight, I was told.  I also remember going blackberry picking with her.  What I wouldn't give for some of her blackberry cobbler.   She worked for a while at my elementary school selling ice cream and cleaning.  She would bring home books for us.  I taught my sister Cindy to read using those books.  I wish that she could see me now.  I did make something out of myself, Granny. 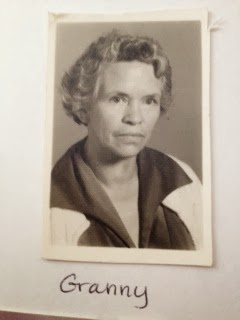 At Granny's we weren't allowed to listen to music other than church hymns or play card games.  We spent most of our time out playing in the woods, warned to stay away from mine holes and not get mica in our eyes.  Granny and Pa had a wood cookstove and no indoor plumbing until I was in middle school.  I can even remember taking baths in a metal tub in the kitchen of their house with water heated on the cookstove.  It was really tough on her when her son was sent to Vietnam at the tender age of 18.
Mama ran away when she was 15 years old to join my dad in Louisiana. 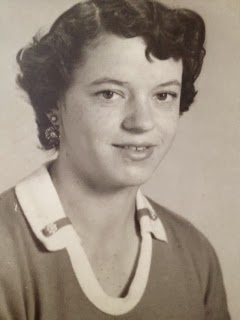 He had joined the Army and was stationed there.  They got married on the base, by the chaplain, I think.  (I actually asked to see their marriage license once during a suspicious phase of my life- just making sure they really were married when I was born!)  My sister has a letter that Daddy wrote to Papa, his dad, explaining the whole elopement thing.  After Daddy was discharged, they moved back to Spruce Pine and my dad built our house on land right next door to his parents, Christine and George Bell, Sr.  On Bell Street.  Tommy and me. 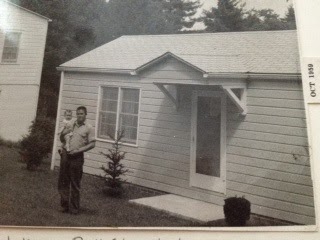 They had four children in the space of four years, beginning with me in 1958 and ending with my sister Moo in 1962.  With a son, David, and another daughter, Cindy, in the middle.  Four children by the time she was 21 years old.  Lord have mercy. 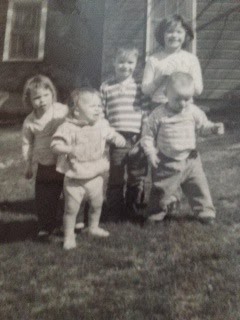 Moo is crying.  Cindy probably pinched her from behind.  The bald-headed kid in front of me is my cousin, Scooter, I think.  At least David and I are smiling for Ma's little Brownie camera.
My dad was a plumber and could build anything with his hands.  He remodeled bathrooms and kitchens and built furniture.  My mom worked in factories mostly.  And raised four children, five if you count my dad.  He was an alcoholic.  Ma left him a couple of times and took us kids to live with my grandparents on the farm.  She always went back, though.  With four little kids and no high school diploma, there weren't a lot of options.  My dad had cancer and she cared for him for four years.  I realized today that she was my age when he died.
Ma remarried a couple of years after Daddy died.  Bruce, bless his heart, had never been married.  I tried to warn him about what he was getting into, but he wanted to do it anyway.  My sister Moo, Mama and Bruce live together, still on Bell Street, but not in the same house.  Someone else bought my grandparents' house and the house I grew up in.  I never go out there.  It all looks different.  They built a highway that took the backyard and our garden.  Papa's shop is gone.  So is his hosiery mill.  Gone are the strawberry patch, cherry tree, apple trees and rhubarb plants.  And the creek I used to cross to get to the Blevins' house.  I used to fall in regularly trying to jump over it.
Mama got her GED, high school equivalency diploma, a few years back.  She was very proud of that. She now works at Ingles grocery store, in the deli.  Yes, at the age of 73 she is still going strong.  She helps care for her sister, Marcella, her only surviving sister, who was recently moved to an assisted living place.  Sadly, I don't think that Marcella recognizes her baby sister anymore.  Mama has two brothers who are still living, but her other four siblings have passed on.
I have always felt unconditional love and support from my mother.  She shaped my life in more ways than she knows.  I know that my love of books and reading comes from her.  She read to us a lot when we were little and took us to the public library to check out books.  When I was a junior in high school and trying to make up mind about going to college, Mildred got me a summer job working at Blue Bell, a factory that made Wrangler blue jeans.  She worked there for several years and they hired high school kids in the summer.  I had spent previous summers working as a waitress at a restaurant in town, named Baker's, and running the gift shop next door to it.  I could make more money at the factory and spend more time with my mom.  Boy, was that a wake up call.  Hot, hard, repetitive work.   I learned to attach belt loops, put in zippers, bar-tac, and put in rivets.  Women were paid by the hour and were paid more when they earned production, which I think was completing a certain number of pieces in an hour or a day.  If I remember correctly, too, it was standard procedure to change a woman to another task once she hit production.  Think Norma Rae, if you've ever seen that movie.  I ate lunch with my mom every day and we would stop for an ice cream cone on the way home sometimes.  I decided to apply to college.  If that was Mildred's evil plan, it sure worked.  I decided that I wanted out.  Even if it meant paying for the whole thing myself, I would do it.  I worked there the summer after high school graduation, too. I didn't venture very far from home for college, but it was a world away.  Mildred would come to visit me in Boone, at Appalachian State University, sometimes.  She would always come get me when I wanted to come home.  She supported me when I took off for France for the first time in 1978. 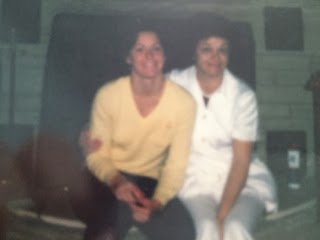 I never lived at home again, though, after my freshman year in college.  I got a job at a golf resort in Linville, once again not far from home, but a world away.  After I graduated and got my job teaching French in Durham, Ma would introduce me to everyone as her daughter the schoolteacher.  She came to stay with us after the birth of Son #1 (she thought I would never have kids-- I was 29 when he was born, the day after her 47th birthday) and again almost five years later after the birth of Son #2.  I don't see her nearly often enough, but I think about her many times during the course of a day.  I hope she has a wonderful birthday and that she knows how much I love her.  There is an extra bedroom upstairs waiting for a visit from you, Mildred!

This is one my favorite cakes that Mama used to make for us, her little crumb-crushers, as Daddy called us. 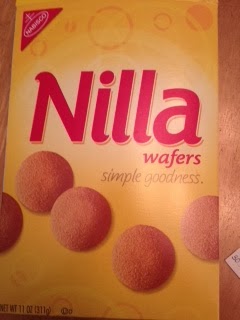 (I am just eating them out of the box, Ma.  I didn't make the cake.  I would have made it for you, though.)

Bon appétit and bon anniversaire, Mama Mildred!  I hope I got all my facts straight.

Posted by The Sabbatical Chef at 1:48 PM

Well, you can go read what I wrote on fb cause I'm sniffling too hard now, but I would sure love to give your mama a hug, and I would give a lot to step/fall in that creek again (I always did too....mama would get so mad at me!), go sit by that big rhubarb plant that was halfway down your grandma!s back yard, and eat a jelly sammich with you :-)

If only we could go back, Mary, just for a day... and swing really high on your swingset. And I would make you the best jelly sammich in the whole world. Much love to you!

Teresa,
This is hands-down my favorite blog entry that you've written since we met as roomies in Paris in 2012 and I started following Sabbatical Chef. I LOVE personal histories, I am FASCINATED by people's life stories. I read almost exclusively biographies - I even read obituaries! Is that weird? Your family's story is charming and forthright and engaging. Thank you so much for sharing. I hope this all makes it into your book. The part about bathing in a tub in front of the cookstove reminded me of one of my family's favorite children's stories - When I was Young on the Mountain by Cynthia Rylant. Do you know it? I think you'd identify with a lot of it. Best regards to you, Teresa, and keep blogging!
Lynne Macko

Thank you so much, Lynne! I read obituaries, too. And I love biographies. I will look for the story you mentioned. Growing up on a farm in the mountains was interesting, that's for sure, even if I only did it part time. A part of America that has vanished. I will be back in Paris with ACIS soon. How about you? Are you traveling in 2014?

Would that I were going to Paris in January. Alas, my teaching position is so tenuous - I've been reduced to .4 this year and next year looks even more bleak. I was afraid to plan an ACIS trip so far in advance and then find out I had no job, leaving students having paid non-refundable deposits, so I did not plan an ACIS trip. I wish you Bon voyage and Joyeux Action de Grâce!